Touring the State Museum of Pennsylvania

I paid a much needed visit to the State Museum of Pennsylvania and toured the natural history exhibits, something I’ve been meaning to do for a while. I’ve walked through this museum many a time, and it’s always a treat. I primarily go to stare in awe at the dinosaur fossils, but I also love the planetarium, and it’s rewarding to check out the archaeology, animal, Native American, Civil War and colonial exhibits too.

Some of the highlights from my trip include the T-Rex skull, Dracorex, Velociraptor, Mastodon, and the impressive Dunkleosteus– a large, predatory armored fish that I wouldn’t want to be swimming with. But there are several things that stood out; most notably the mystery and uncertainty surrounding these once living, majestic creatures, and the dating techniques used to determine their age.

The mystery behind these prehistoric creatures delivers a captivating allure; it’s fun to strike up the imagination and consider what these creatures would have looked like in real life, how they would have behaved, and what it would be like to live alongside them today. Films like Jurassic Park attempt to answer some of these questions from an entertainment perspective, but there’s still so much we don’t really know.

Now as much as I enjoy observing these fascinating fossils, there are several things that bug me: first is the certainty surrounding the dating techniques. Captions next to these creatures tell us, for example, that Dunkleosteus lived during the Devonian Period, between 408 – 362 million years ago. But of course it’s impossible to know that with any amount of certainty because the dating techniques used to determine these ages aren’t reliable. They rely on unknown factors and assumptions that can’t be substantiated- such as contamination, the initial elements in the fossils, and circular reasoning.

The second thing that bugs me are the evolutionary assumptions. Holoptychius, for example, is classified as a lobe-finned fish and is considered closely related to early amphibians; its lobed fins are described as “unusually fleshy” and “may have been” used for crawling. Such evolutionary connections between fish and amphibians can never be substantiated because there’s no experiment that can be performed to confirm such a claim. These conclusions are based on interpretations of the data, assumptions and inferences. Yet many who wander by these exhibits wouldn’t think to question them. 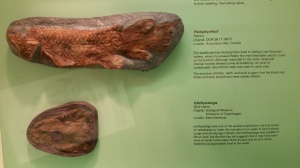 But this wasn’t the first time a lobe-finned fish was claimed to have the ability to crawl or walk. Coelacanth is another example of a fish that had supposedly evolved the ability to walk on land prior to evolving into an amphibian… except that one was caught off the coast of Africa in 1938, and it was discovered that it swims like a fish and doesn’t walk or crawl at all. It was once believed to be extinct because it had “disappeared” from the fossil record, but has since been found alive and well. This example nicely demonstrates how evolutionary assumptions can lead to incorrect conclusions, and it shows how important observational evidence is. Without this discovery, the Coelacanth would still be an icon of evolution.

Continuing my walk through time, I came across an Ichthyostega– supposedly one of the earliest amphibians. This extinct animal was a vertebrate, and the exhibit came equipped with strong, stubby legs for walking on land and a tail ideal for swimming. The evolutionary overtones were strong, as the caption referred to it as “transitionary” with a “fish-like” tail, as if it had evolved from a fish. At the very least I was pleased that the captions provided disclaimers like “suggest”, “may have been”, and “probably”, all of which acknowledge that the evolutionary connections are anything but certain.

(Ichthyostega: Considered to be one of the earliest amphibians)

There was a nice fossil replica of a crocodile-like animal called a Redondasaurus, some smaller dinosaurs, such as Coelophysis (hollow form), and the flying Archaeopteryx and Rhamphorhynchus. 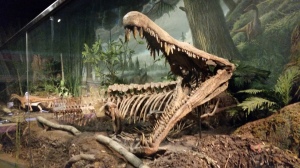 The mighty Tyrannosaurus Rex skull was most impressive, as was the well-known Triceratops (three-horned reptile). Other noteworthy dinosaurs were the Velociraptor (speedy predator), famous for its role in Jurassic Park, the armored Anklyosaurus (fused reptile), and the domed Pachycephalosaurus (thick headed reptile). 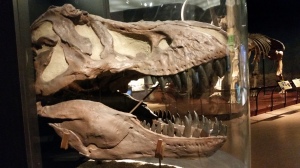 As I progressed along the trail I came upon fossils of extinct mammals, such as Oreodon (meaning Hillock teeth”), and then larger mammals related to the elephant, such as Platybelodon and a Mastodon.

Now if I had to choose one fossil that stood out from the rest, it would have to be the dragon-like Dracorex– a heavily horned and ornamented dinosaur that makes it easy to understand how dragon myths must have begun. If we accept that humans and dinosaurs once lived at the same time, then seeing one of these in the wild would make for an amazing story, and would quickly become legend. But one would never forget such a fantastic spectacle. 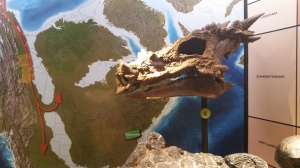 3 thoughts on “Touring the State Museum of Pennsylvania”