Blue Ridge Christian Academy, a school in Landrum, South Carolina, has unintentionally stirred up some controversy over a fourth grade science test. The test was about dinosaurs and the Bible, and it has secular science in an uproar!

Atheists are calling this the “world’s worst science quiz” and “anti-science”, and claim that “that kind of garbage is ridiculous” and “nonsense”, and wonder, “how is this even legal?”

The test asked questions such as: 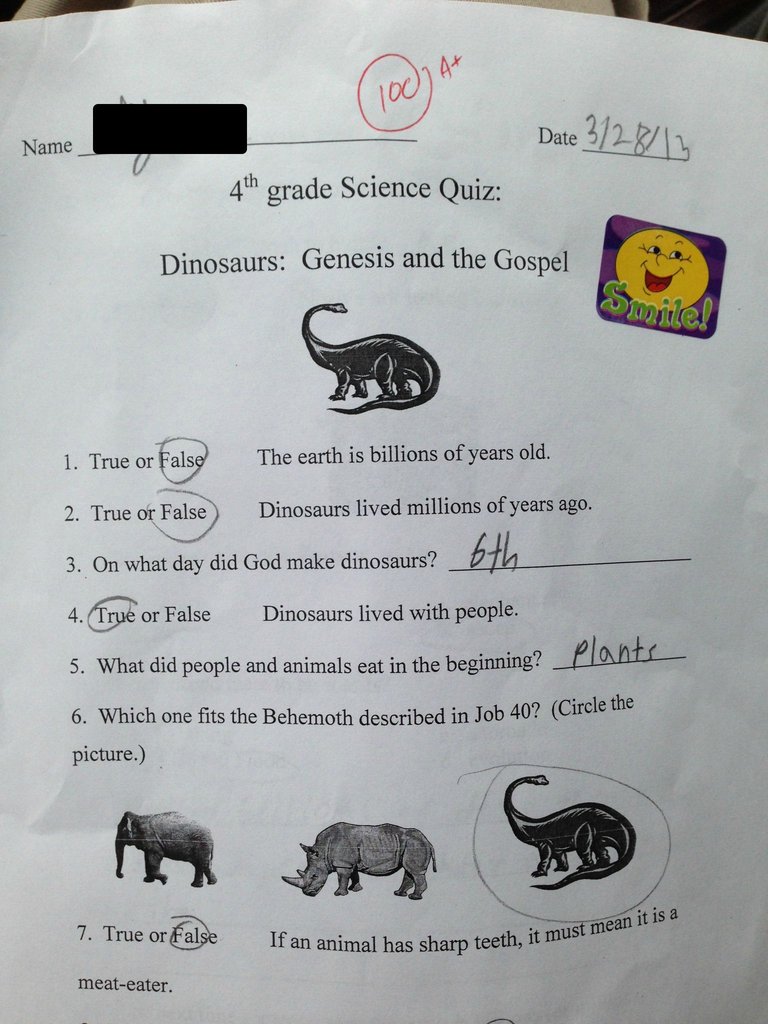 The student answered all the questions correctly and was rewarded with an A plus, but then the student’s father posted a photo of the test on a social media site, and immediately the criticism began. Atheists are up in arms because the school is providing Biblical answers regarding the appearance of man and dinosaurs on earth and they don’t want anyone believing anything other than the answers they find acceptable.

Despite all the controversy and criticism, there is good news for the school. It turns out that prior to the controversy the school was having financial trouble. They even warned parents that the school might have to close if it couldn’t raise $200,000 for next year’s budget. But all the media attention has brought in donations from around the world, and so far has raised over $5,000.00, and they’re hoping the donations will continue.

Blue Ridge academy does in fact include the theory of evolution in its science curriculum. Diana Baker, the school’s administrator, explained, “The assumption that this (creationism) is all we teach or that we don’t also teach opposing viewpoints is erroneous.”

Since the school does teach evolution I would argue that the students at Blue Ridge Christian Academy are better equipped and have a better understanding of science and evolution than students at secular schools where they are forbidden from learning about the flaws and controversies surrounding evolution. This is because the BRCA students actually get to learn what evolution is and what it isn’t. In my experience, those who haven’t learned about the flaws of evolutionary theory aren’t able to think critically about it and don’t know that there’s a competing theory that better answers the scientific questions.

I’m very pleased that Blue Ridge Christian Academy stands firmly on the Word of God and isn’t ashamed of the truth. The Bible’s account of our origin is God’s revelation to man, and it accurately describes who we are, where we came from, and what our purpose is. It does indeed speak of dinosaurs living alongside man. The book of Job describes both the behemoth and leviathan. Genesis one tells us when man and dinosaurs first appeared (day six) and what their original diet was (plants, fruit). The dating methods relied upon by secular science are inaccurate, and the observable evidence supports a young earth rather than one 4.55 billion years old.