January 22 marks the 45th anniversary of Roe v. Wade. It was on that day in 1973 that the Supreme Court of the United States declared state laws prohibiting abortion unconstitutional, ushering in one of the greatest civil rights violations in the history of the United States. Since that fateful day, it’s estimated that nearly 60 million unborn humans have had their lives ended without due process.

As I marched down Constitutional Avenue towards the Capital building and the United States Supreme Court on this winter day, I was able to reflect on what has been taking place over the course of the last 45 years. Not only have many millions of human lives been snuffed out, but many of the women involved have become victims of a gruesome procedure, their lives forever changed; many of these women end up suffering from depression and other severe emotional and physical problems, some even dying from a botched abortion.

Thus, I found it troubling when we marched past the Supreme Court and read the inscription across the front of the building, which read, “EQUAL JUSTICE UNDER LAW”. For these unborn humans, however, there is no justice at all. Their lives are aborted without regard for equality.

But this year’s march was about hope and a future where life is valued and protected. The theme for this year was “Love saves lives,” and I believe that’s true. Pam Tebow- the mother of NFL star Tim Tebow- told her touching story about how doctors were persuading here to have an abortion, or else she would likely die. But she wasn’t willing to terminate her child’s life; instead, she loved her unborn child enough to give birth, and she and the child survived. Her son, Tim Tebow would later become a multi-sport athlete and himself be a light and positive influence to those around him. 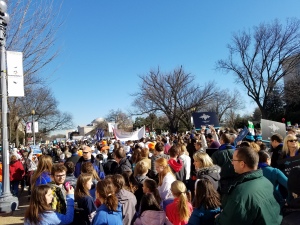 Other women told their stories of hope and love, and how that lead to life. I was also encouraged by Vice President Mike Pence, who spoke to the crowd via satellite, as well as President Donald Trump, who is the first American President to speak at the March for Life rally. Trump has launched a new division within the Department of Health and Human Services, and he is making good on his promise of being a pro-life President, vigorously fighting for the rights of doctors and nurses who don’t want to perform abortions due to their religious beliefs or their consciences. 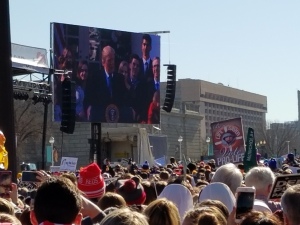 Participating in the March for Life has been an incredible experience with real meaning and purpose. I believe all people are created in God’s image, and that all people have worth and value, including the unborn. I believe it’s important for us, as a society, to care for the most vulnerable among us, those who do not have a voice of their own. We also need to show compassion and love to those women who find themselves in crisis, and there are crisis pregnancy centers all around the United States willing and able to help these women in their time of need.

Elections matter, and I encourage my fellow pro-life friends to support the cause by voting for pro-life candidates, attend future marches, and support pregnancy centers that value life and truly care for the well-being of both mother and child.

I think we’re much closer to seeing meaningful change, and it’s my hope and prayer that the legality of abortion will be overturned, and that life will be valued. Love saves lives.