The film documentary, Alien Intrusion: Unmasking a Deception, was released in theaters this past week for a one-night-only viewing, and I was very pleased with how well done it was, and the way this ‘fringe’ topic was tackled.

As an avid sci-fi fan, I have to admit that I enjoy space alien movies, such as ET, Star Wars, Star Trek, and the like. But when it comes to reality, the existence of space aliens turns bizarre, and maybe even creepy. Some very credible people, including astronauts and military pilots, have reported seeing UFOs, and there are still sightings around the world that remain unexplained. It’s estimated that as many as 20 million Americans have seen UFOs. But what makes so many people think these ‘flying saucers’ are alien in nature?

I think a large reason why so many people believe that aliens exist is due to the belief in evolution. Even very intelligent scientists, like Stephen Hawking, have publicly announced that they’re believers, and are convinced that life must exist elsewhere in the universe simply because we exist. You see, if life was able to spontaneously begin from non-living chemicals here on Earth, then it’s inevitable that the same kind of phenomenon would have happened elsewhere in the universe. Francis Crick, one of the discoverers of the structure of the DNA molecule, went even further, putting forth the idea of panspermia, where aliens seeded Earth with life. Others have even claimed it’s arrogant to believe we’re alone in the universe.

“I believe that there is life all over our universe, since it would be the height of arrogance to think that we are alone,” Dr. Leroy Chiao, astronaut.

It’s estimated that some four million people claim to have been abducted by aliens, and that’s where the weirdness factor increases. Many of the experiences of those who claim to have been abducted have some commonalities, and the film tracks these and concludes that many of these people have had genuine ‘experiences’, in the sense that their lives have been forever changed- similar to how a soldier experiences PTSD during war. But the film goes on to provide an explanation and solution for these experiences, and it flies in the face of evolution. 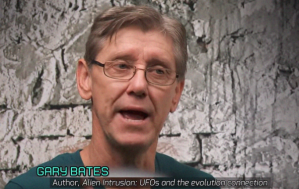 Gary Bates is the author of the book, Alien Intrusion, first published in 2005, and it has now made its way onto the Big Screen. John Schneider (of Duke of Hazzard) narrates the film, and explains that there is real hope for those who have been traumatized by their experiences. Bates has traveled around the world, interviewing both experts and witnesses, and he has indeed provided answers, hope and healing.

While the film may be instrumental to those who have had such experiences, I think it’s a valuable resource for anyone who wants a better understanding of this world-wide phenomena, and dare to think outside the evolutionary paradigm. Most importantly, I think the film does a great job explaining how important God’s existence is on this topic.