Thursday afternoon I was able to enjoy the theatrical experience of Noah at the Sight and Sound Theater in Lancaster, Pennsylvania, and came away very impressed. The Biblical account of Noah is one of my favorite passages, and I was eager to see it live on stage. It promised to have both live and animatronic animals, a strong cast of actors, and a 40-foot-high ark.

The show remained true to the Biblical text and created a welcome visual depiction of these historical events. The various scenes took creative license by filling in the details of each event of the account, adding colorful drama, dialogue and characters to drive the storyline, and this was well done, not detracting from the Bible’s revelation. Noah and his sons, for example, traveled to the city expecting to purchase supplies for building the ark, but the wickedness of the inhabitants was plain- yet it wasn’t graphic or unsuitable for children. In fact the story was perfect for a wide range of audiences- children and adults of all ages. 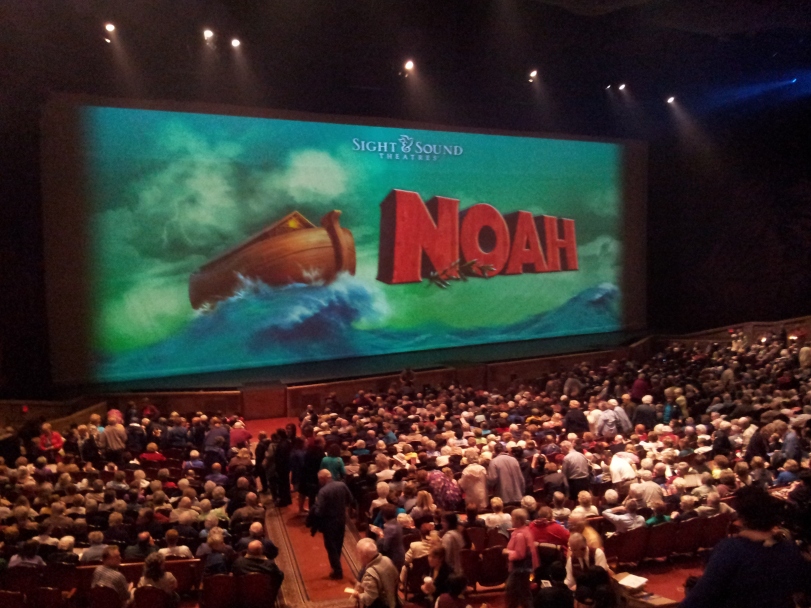 There was little to criticize; certain references from the Bible weren’t included, and it wasn’t a perfect rendition, but I don’t see any reason to be overly critical in this area. One thing that was depicted and is questionable is whether or not there was rain before the flood; the storyline took the position that it hadn’t rained on the earth prior to the flood- yet there were clouds in the sky throughout the production. I can get past that, although I believe there was more than likely rain prior to the flood. My typical pet peeve associated with any rendition of Noah’s Ark is whether or not dinosaurs are included, and, as expected, there were none on board. I think few writers and directors even consider adding dinosaurs because it’s such an uncommon practice. But even if they did consider it, the public isn’t used to such a depiction and doing so could possibly cause unwanted controversy, thus detracting from the production. However I think that would really make a powerful statement while being authentic at the same time. I look forward to the day when such a practice becomes the norm.

I haven’t seen that many large-scale productions, so it’s tough to compare it to something like Broadway, but I thought it was a terrific performance. The actors were entertaining, and the Biblical message and theme were clear. The price of admission was definitely worthwhile, and I’d encourage anyone to watch it before the season ends.