I purchased the September issue of Scientific American, which was oozing with human evolution. Needless to say, I couldn’t wait to examine the latest discoveries on display for public consumption. 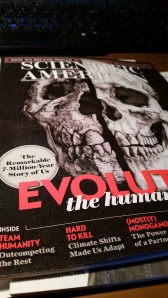 In Johannesburg, South Africa there’s a system of caves known as Rising Star. It’s here that researchers are collecting the fossilized remains of humans. Interestingly, they refer to these remains as an “extinct” member of the human family- as if they’re able to tell with certainty that no modern humans share any ancestry with them. This is interesting because the entire edition of this magazine is devoted to evolutionary revisions and the uncertain nature of science.

In fact the headlines and associated blurbs present some remarkable admissions from the evolutionary community. This is because the usual evolutionary spin would lead us to believe that there’s no question that humans evolved from a single celled organism; that there’s no debate on whether or not evolution has occurred; and that there’s no controversy within the scientific community. According to this worldview, the only people who question evolution aren’t real scientists, so their opinions don’t count. Or so it goes.

The headline proclaims: “Evolution Rewritten: Startling new findings are upending much of what scientists thought they knew about our beginnings.” This is amazing. Consider that evolution is taught as fact in public schools and colleges. It’s taught with absolute certainty, as if it’s the only thing that makes sense, and if one doesn’t believe it, then there’s no way that individual could possibly be a scientist, doctor, engineer, or even cope with reality- at least according to the usual suspects like Richard Dawkins and Bill Nye.

According to Dawkins, “You can’t even begin to understand biology, you can’t understand life, unless you understand what it’s all there fore, how it arose – and that means evolution.”

And Nye has repeatedly made ignorant claims, such as, “Evolution is the fundamental idea in all of life science, in all of biology.” And if you don’t believe in evolution, then “Your whole world is just gonna be a mystery.” He’s wrong on both of those counts, yet his claims profess absolute certainty.

So here we have a credible scientific magazine touting that scientists are revising virtually every chapter of the human story of evolution. What they originally believed and thought was all wrong. Wow! How can that be if we’re to believe anything the elite evolutionists have told us? If one has to believe in evolution in order to understand biology and life, but then be forced to continually change every previous belief because it was completely wrong, then how well was it understood in the first place? Obviously, not very well. Would it be fair, then, to say that evolutionists are the ones who don’t understand biology and life? If they really understood it, then all the changes would be unnecessary. Further, we’ve been told that the ability to make accurate predictions is a staple of science, but if that’s true, then these startling new findings should serve as a warning sign that evolution isn’t really science; the inability to make accurate predictions should have scientists rejecting it. But we don’t see that happening. Instead, evolutionists ignore these hurdles without any criticism.

Therefore, I suggest that we need to be skeptical about what outspoken evolutionists like Dawkins and Nye have to say about science- especially when their beliefs are disguised as science. I’d like to see students be taught the importance of skepticism and the uncertain nature of science.

The article goes on to highlight some of the exciting finds in Rising Star, including an entire population of humans. So far researchers have collected more than 1,500 bones and bone fragments- and there are many more that remain.

The writer points out that history has shown that the story of our origins is constantly changing based on the discovery of new fossils. In fact there are many recent discoveries that are “upending bedrock tenets of human evolution.” And scientists are revising “virtually every chapter of the human saga.”

The article presents a case study from the late 1990s in which secular scientists had a “pretty good handle on our evolution.” At that time it was believed that Neandertals and several Homo species arose in Eurasia about 4.4 million years ago and thrived for hundreds of thousands of years until a new species of Homo sapiens left Africa and drove the Neadertals and other species to extinction before spreading across the earth. Well, that view has now been soundly rejected, and new models have been proposed. We now have a hominin fossil from Africa supposedly seven million years old. Obviously, if we’re to believe that, then the human fossil record has been extended by more than 2 million years. Even the location of where humans evolved keeps changing. Humans supposedly emerged from East Africa, but then it was thought to be West Africa, and now some think they emerged from South Africa. Now scientists believe that humans left Africa hundreds of thousands of years earlier than previously thought.

Another interesting admission is when the writer tells us that no chapter of human history has been as rewritten as the one detailing the ascent of Homo sapiens. But I have to wonder why that is. Isn’t it mainly because evolutionary history happened so long ago that nobody really knows what happened? We can’t go back in time and observe anything that happened while it was happening, so we must speculate and write a plausible story based on our beliefs about the past. If, for example, we believe all life arose from a single common ancestor, then our conclusions will reflect that. But if we believe that God created man in his image, and that he created animals to reproduce after their kind, then we arrive at a completely different set of competing conclusions.

Another change outlined in the article is the cognitive divide between Homo sapiens and their ancestors. Scientists concede that Neandertals weren’t the stupid brutes they were once portrayed as; they used paint and jewelry, and buried their dead. Scientists are also admitting that modern humans share up to 20% of the genetic material of Neandertal, which means that our ancestors interbred with them, so they haven’t gone completely extinct.

At the end the writer admits that anything reported in this edition of their magazine is not the final word- and she wouldn’t have it any other way. It’s nice to see that some people do recognize the uncertain nature of science. But the fact that she wouldn’t have it any other way is revealing on several counts. First, notice that she’s not questioning evolution; the fact that scientists were wrong about everything they once believed doesn’t bother her at all. I think students of evolution are being taught contradictory claims, and they learn to compartmentalize them. Students are taught not to question the certainty of evolution, and then taught to embrace the fact that science isn’t about certainty. So which is it? Both can’t be true unless there’s a way to justify the two opposing views in our mind. And that’s what happens. One claim is based on faith, while the other is based on science. The previous quotes by Dawkins and Nye are examples of faith-based claims- they demand that evolution be accepted without question and ridicule anyone who doesn’t conform. That’s a worldview based on faith. But the uncertain nature of science is undeniable because it’s easily observed.

Let me provide another example of the religious nature of evolution that serves to insulate itself. The National Science Teachers Association (NSTA) tells us, “Because science is limited to explaining the natural world by means of natural processes, it cannot use supernatural causation in its explanations. Similarly, science is precluded from making statements about supernatural forces because these are outside its provenance.” Notice that it uses the words, “cannot” and “precluded”. This reveals what they really think about science. Refusing to allow any explanation that considers the existence of God and his creative work denies the uncertain nature of science. If God does exist, and if he really did create the heavens and the earth, and if he revealed that information to us, then such a position is nonsense. They refuse to acknowledge the uncertainty in science, but instead treat science as if it’s settled. If, however, they acknowledged the uncertain nature of science, then they wouldn’t be able to exclude supernatural causation. They would be forced to admit that supernatural causation is permitted. Worse yet, even though they tell us that science is precluded from making statements about supernatural forces, they end up doing just that by attacking those who believe God created the universe.

Nonetheless, I think scientists would love to have certainty in science. But since they can’t, they’ve learned to accept it only when it suits them. They claim that the mysteries and uncertainty in science are beautiful, exciting and wanted, but when it comes to evolution, they are quite certain that it happened, even though they don’t know how it happened.

Therefore, all these revisions are relevant to creation science. Creationists rejected all the past models of human evolution, and we also reject the current models. We were justified to reject the old models, and time will vindicate us in rejecting any current model.

Lastly, I think this article reflects some of the clear differences between creation science and evolutionary science. One relies on revelation from God, while the other is completely man-centered. And what that means is that if the Bible really is the Word of God- as it claims- then we have access to the true history of humanity as revealed by God, and we don’t have to rely on fallible humans to piece together the past in a way that will always remain suspect. We can have a certain level of certainty based on faith, even though it’s outside the realm of science. In other words, science and faith are working together in complementary roles.