Astronaut Scott Kelly spent nearly a year in space, orbiting Earth for an American record 340 days aboard the International Space Station. His mission began March 27, 2015 when he and Russian Cosmonaut Mikhail Kornienko boarded the Soyuz TMA-16M spacecraft, and it ended when they returned to Earth on March 2, 2016, landing in Kazakhstan.

I have a lot of respect for what these men have accomplished, especially their willingness to be human guinea pigs for future space missions, testing the stresses placed on the human body. Prolonged exposure to microgravity has numerous deleterious effects, impacting bones, muscles, blood vessels, eyes, and other organs. Get this- Kelly grew 1.5 inches due to his spine temporarily expanding! Although that sounds like a fortunate side-effect, he returned to normal height soon after returning to Earth.

Some not-so-surprising side-effects include muscle soreness and fatigue; but one problem I hadn’t considered was general skin sensitivity, which he described as “almost like a burning feeling wherever I sit or lie or walk.” Without the stress of gravity pressing against him, his skin lost its protective durability.

I thought it was cool that his identical twin brother, Mark- also an astronaut- is part of the experiment, serving as a control subject. These two men, along with their Russian counterpart, will help scientists learn more about the long-term effects associated with microgravity and exposure to radiation before they send anyone on a prolonged mission to Mars, which would take about a year to reach.

I also admire the innovation of the human spirit to keep these astronauts and cosmonauts in good health during their time in space. The ISS is equipped with one of the best and most complex water recycling systems ever developed, collecting sweat and urine, and turning it into drinkable water. In fact I love one of Kelly’s Tweets:

“Recycle Good to the last drop! Making pee potable and turning it into coffee on @space station. #NoPlaceLikeHome”

Despite the cramped conditions, Kelly enjoyed some spectacular views, and I enjoyed perusing some of the many photos he took while orbiting the Earth every 90 minutes. He witnessed amazing sunrises, auroras, the Bahamas, steaming volcanoes, blizzards and hurricanes, city lights at night, ice covered lakes, and snow-capped mountains. He also cared for crops in the Veggie lab, raised the first zinnias to bloom in space, measured radiation, and even made several space walks.

It’ll take about six months before we start seeing results from the study, but I’m looking forward to seeing what kind of new developments and technology stem from all the data collected. Space is a hostile environment, unsuitable for life, but human ingenuity is certainly capable of overcoming these obstacles and making it possible for humans to explore and, perhaps, colonize other planets. 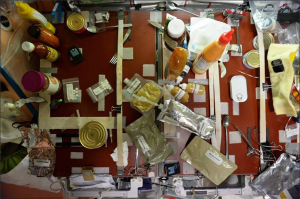 God created an incredible and immense universe, and right now we’re on the verge of sending mankind further than we have before. As long as space exploration helps improve our lives on earth, then I think the money spent is worthwhile. It’s rewarding to witness human achievement and see what we’re capable of, stretching the limits of what we can do and where we can go. I don’t think it’s necessary to colonize Mars or the moon because we’re worried about overpopulation on Earth, or because we want to find alien life- but because God has given us the desire, drive and curiosity to do so. Let’s see where we go from here.