The largest timber-framed structure in the world just received an unlikely visitor as Bill Nye “the Science Guy” made an unscheduled visit to the Ark Encounter in Williamstown, Kentucky on Friday. Visitors were treated to a two-hour impromptu debate as Ken Ham graciously guided Nye on a personal tour through all three decks.

The Ark Encounter, which opened to the public on July 7, 2016, is an amazing representation of the historical Noah’s Ark- what it may have looked like, how it could have been built, and how feasible it would have been for Noah and his family to care for all the different kinds of animals that would have boarded during the year-long global flood. 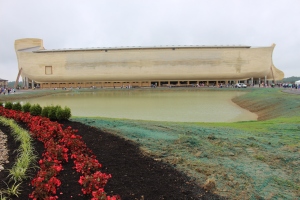 Several weeks ago Ken Ham publicly invited Bill Nye on a personal tour, and Nye accepted. The fact that he accepted is both interesting and encouraging. You could say that Bill Nye is Ken Ham’s arch enemy, much like Lex Luther is to Super Man; Nye has been openly hostile to Ken Ham, the Creation Museum, Ark Encounter, creation science, Christianity, and even religion in general, attacking them as “anti-science”. So it’s not surprising that the two adversaries challenged each other on their beliefs about science and faith in a clash of worldviews.

Apparently Ham encouraged Nye to speak to the PhD scientists employed by Answers in Genesis, such as biologist Dr. Georgia Purdom, a molecular Geneticist, geologist Dr. Andrew Snelling, and research biologist Dr. Nathaniel Jeanson. But Nye called them all “incompetent”. That’s a shame he would resort to spiteful criticism, but such a remark is common from those biased against an opposing worldview.

But the biggest takeaway from the whole event was the opportunity Ham had to share the gospel message and pray for Nye. Even though they’re often matched as mortal enemies, Ham was gracious and loving, wanting Bill Nye to come to salvation in Jesus Christ, and even extended an offer of friendship. Unfortunately, Nye rejected the call to friendship, instead saying they could be acquaintances with mutual respect.

I’m very thankful Bill Nye accepted Ham’s offer to visit the museum. I remember hearing about the offer, but never thought Nye would take him up, especially after receiving so much criticism for debating Ham back in 2014. But he came, and it was a tremendous opportunity for him to gain an understanding and appreciation for science and faith from a perspective he’s hostile to.

While I don’t think this opportunity will change his heart, I do hope it lays the groundwork for Nye to see there’s something of substance to Biblical claims of a young earth that can be substantiated by the scientific evidence and sound doctrine. I expect Nye to continue his criticism and hostility, but, perhaps, as the two adversaries become acquaintances with mutual respect, his heart will change. Therefore, if you’re a believer, please be praying for Bill Nye and other unbelievers who tour the Ark Encounter and Creation Museum because this is really what these attractions are all about; they’re meant to provide a sound reason for Biblical faith in Jesus Christ, while also providing scientific evidence at the same time.