On the 44th anniversary of Roe v Wade, there has been real progress made for the most vulnerable among us. It’s hard for me to fully understand how the right to life has been so deeply politicized, but America is drawing closer to the day this Supreme Court decision will be recognized for the bad legal decision many believe it is.

With the election of a pro-life president and vice president, we have seen the rallying cry to defund Planned Parenthood, a pro- abortion group that capitalizes on unwanted pregnancies. President Trump signed legislation, reinstating the Mexico City Policy, banning federal funds to international groups performing or promoting abortion, and Vice President Pence spoke at the March for Life rally, becoming the first vice president to do so; he reminded the crowd of what the founders of our great country wrote over 240 years ago: that we are all endowed by our creator with certain unalienable Rights, and among these are Life, Liberty and the pursuit of Happiness. 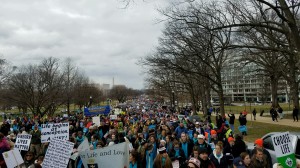 These unalienable Rights were rejected by the Supreme Court on January 22, 1973 when it declared state laws prohibiting abortion as unconstitutional. Nonetheless, with great advancements in science, it’s now indisputable that life begins at conception. Babies have been born as early as 21 weeks after conception and have survived. Baby Amillia Taylor was born 21 weeks, 6 days into her gestation when she made headlines in 2008 as a ‘Miracle’ baby. And in 2011, baby Frieda Mangold was born 21 weeks, 5 days into her gestation. Other babies have survived abortions and have gone on to become some of the strongest pro-life supporters, like Gianna Jessen, who still carries physical wounds, but is filled with love and compassion for both mother and child.

I find it encouraging to see the pro-life cause being taken up by a younger generation of supporters as they learn more about this issue. The youth of America are recognizing the need for the unborn to have a voice, and they are becoming that voice.

One supporter, Amanda Fowley, has attended every march since she was 13. Now, at age 33, she says, “There is no more important issue for me… I am here marching to recognize the babies, of course. But I also march for the women and for the pain many of them go through after the abortion. So often they are told there are no consequences and that is not true. They are lied to about what happens after an abortion.”

I’m very thankful for everyone who attended this year’s march. I know this is a very heated topic, and the emotions run deep, but I believe life choosing life is the right thing to do. 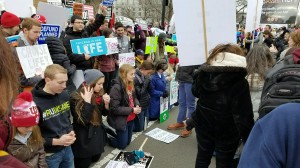