Undeniable: The Intuition of Design and its Confirmation

By Jonathan Silcox May 23, 2017 Douglas Axe West Minster Conference on Science and Faith

This is the second in a series of posts on the 2017 Westminster Conference on Science and Faith, and in this session, Douglas Axe spoke on design in biology.

Dr. Axe has a Ph.D. in biochemical engineering and is the author of Undeniable: How Biology Confirms Our Intuition That Life Is Designed. He’s been a favorite speaker of mine, so I was very pleased to hear him once again.

It shouldn’t come as a surprise, but common sense reasoning is superior to high level academic reasoning. One can be very well educated, yet lack common sense. The ancient Greek philosopher, Gorgias (485-380 BC), for example, was brilliant, but very wrong when he said, “Nothing exists.” Really? One would think our existence was obvious.

Yet today we can still find a lack of common sense reasoning in everyday life, and Dr. Axe points to the teaching of Darwinism as fact as another example. Common sense reasoning should lead us to conclude that the origin of all living organisms couldn’t happen by chance.

As a case-in-point, young children are able to look around and see design in the world. According to Alison Gopnik, a professor of psychology at UC Berkeley and an atheist, “By elementary school age, children start to invoke an ultimate God-like designer to explain the complexity of the world around them, even children brought up by atheists.” Atheists, of course, find this problematic, so Gopnik has sought to reach children before they develop such thinking and indoctrinate them into evolution with her picture book, See Jane Evolve. Thus, we can see an on-going culture war in our public schools. Personally, I’d rather children learn to use common sense reasoning and seek truth.

The idea that the universe, earth, and all life are designed is so apparent that Francis Crick, the famous atheist who discovered the structure of DNA (along with James Watson), said, “Biologists must constantly keep in mind that what they see was not designed, but rather evolved.”

I find that statement rather profound. What would provoke an atheist to say that? Atheists love to claim there’s no evidence for the existence of God, yet such reminders suggest just the opposite. Consider, for instance, how well the earth and universe are perfectly tuned for people to thrive; is there any question that our existence isn’t a mere coincidence? The way the moon and planets absorb meteor impacts, protecting the earth from many collisions, or the way gravity is perfectly tuned for the tidal forces exerted by the moon. Even the various life-forms on earth form symbiotic relationships to keep the life-cycle going. Not to mention what happens at the micro level when our blood clots to protect us, or how repairs occur in a single-celled organism. And notice the atmosphere and how it protects life on our planet. But since much of this is self-evident, Crick needs to remind himself, and others, that the appearance of design is just an illusion.

Atheist professor of biology, Will Provine, agrees with Crick, saying emphatically, “Let me summarize my views on what modern evolutionary biology tells us loud and clear … There are no gods, no purposes, no goal-directed forces of any kind.” Once again, atheists must make it clear that, despite the obvious appearance of design, they purposely refuse to accept such common sense as truth.

Still, Dr. Axe continues his appeal to commonsense reasoning, concluding that design can be recognized. Take origami, for example. An origami bird doesn’t happen by accident. Why? Because there are too many steps, making it an impossible sequence. Axe would consider the successful completion of such a sequence as ‘fantastically improbable’ because accidents can’t do the work of know-how, and accidents can’t invent.

He then points to functional coherence: the hierarchical arrangement of parts needed for anything to produce a high-level function- each part contributing in a coordinated way to the whole.  This sort of coordination only happens by insight, never by coincidence.

These principles apply to the appearance of life and the supposed evolution of living organisms. Such occurrences would require an impossible sequence of events and should be considered fantastically improbable. As Dutch botanist Hugo DeVries said in 1914, “Natural selection may explain the survival of the fittest, but it cannot explain the arrival of the fittest.” And Professor Andreas Wagner said, “Natural selection can preserve innovations, but it cannot create them.”

I found Dr. Axe’s session very helpful and look forward to reading his book for greater detail. I obviously agree with him that design is apparent, yet atheists will very rarely admit this; instead, they attempt to rationalize alternatives and have faith that the universe can be explained in terms of purely naturalistic processes, despite the odds, and then claim such thinking is based on science and reason. In the end, there are two competing worldviews: 1) either we’re here by chance, or 2) we exist on purpose and for a purpose. I believe the evidence clearly points to God. 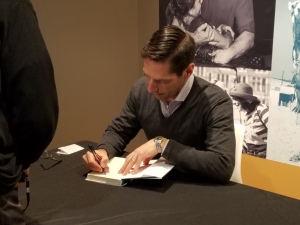 2 thoughts on “Undeniable: The Intuition of Design and its Confirmation”