How A Person Of Science Can Believe in God

Here’s an unexpected article and video I found in the Huffington Post, of all places. The article asks, “How Can A Person Of Science Believe In A God?” And it’s answered by physicist Gerald Schroeder, an author and lecturer who holds a PhD in nuclear physics and earth and planetary sciences.

He doesn’t go into any detail about secondary questions, like how old the universe is, or if evolution happened. He simply asks the question, “Why is there existence in the first place? Why is there something rather than nothing?” 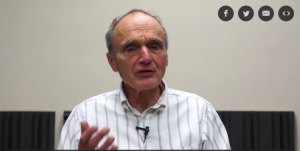 I love this elegant response because, if there is no God, then there’s really no reason for anything to exist at all. Without God, there shouldn’t be anything, let alone complex beings who can perceive their own existence. So, he asks, “Does there have to be existence?” No, not at all.

I’d expect a skeptic to counter this by explaining that our existence and universe is merely a chance event which might never happen again if everything started over, and that the theoretical existence of multiverses makes our existence inevitable. But I think such a response is a cop-out and built on a greater faith than one would need to believe in God. I think it’s much more logical and likely that God exists and created human beings and the universe on purpose rather than anything existing as a result of dumb luck and blind chemical reactions.

The universe isn’t a chaotic mess. No, the laws of physics have been finely tuned to our existence, and our galaxy and planet were perfectly created for people and all living organism to thrive.

Many people seem to get the impression that science and faith are in conflict, and, if you’re a scientist, then you can’t believe in God. But none of this is true. Perhaps the majority of scientists don’t believe in any kind of god, but there are many who do, and the idea that science and faith are in conflict is ideological, not factual. Consider topics of disagreement- like evolution and the age of the universe; these disagreements are due to a particular worldview, or set of beliefs. If one rejects the existence of God and puts their faith in science, then it’s reasonable that they would accept things like evolution, long ages, and the Big Bang. While, if one does believe in God, then one is able to explain such phenomena without resorting to evolution and chance. It’s the interpretation of the evidence that ultimately will determine these conclusions.

The video is just under three minutes, so feel free to take a moment, pull up the article, and view the video.