Dark Matter May Not Exist

An article over at Discover Magazine exposes some of the weaknesses of the Big Bang theory and proposes an alternative view.

There are plenty of problems with the Big Bang, and I believe there are very good reasons why it should be rejected. Firstly, it deviates from our Biblical origins as described in Genesis, but after that, it doesn’t hold up to scientific scrutiny.

The Catholic Priest and physics professor Georges Lemaitre (1894- 1966) first proposed what become known as the Big Bang after he predicted that the universe was expanding from a ‘Cosmic egg’; this expansion was later confirmed by Edwin Hubble and has been helpful to science and our understanding of the universe. Thus, the Big Bang seems to affirm that there was a beginning to the universe, just as the Bible indicates. That posed a dilemma for secular scientists who wished to avoid any evidence of God’s existence and his creation of the universe. But the evidence for expansion was so overwhelming that the scientific community was forced to accept the Big Bang. Nonetheless, there are major problems that have never been resolved, and the theory has been losing support for years. 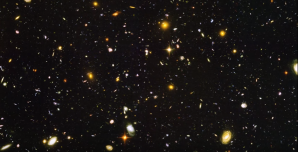 Erik Verlinde, a professor of science mathematics and informatics at the University of Amsterdam, is one of many scientists who don’t ‘buy into’ these rescuing agents. He’s developing an alternative theory called “emergent gravity”, or “entropic gravity”.

This is a cool concept, but it’s too early to tell if this explanation is correct, or if it’s any better than the current one. It proposes that gravity isn’t a fundamental force, but a reaction to the makeup of an environment, or the result of the quantum interaction of bodies.

Currently, physicists can’t explain certain phenomena- like the speed of spiral galaxies and the accelerating expansion of the universe- without inventing things like dark matter and dark energy, which assume the Big Bang to be true. Some people insist that dark matter and dark energy are real and can be inferred from observational data, but, again, this reasoning is based on assumptions they believe to be true but have not been substantiated; it’s the result of a secular worldview demanding naturalistic explanations, even when unwarranted. Such reasoning is faulty. Many millions of dollars have been poured into the hope of finding dark matter and dark energy, yet these constructs are still considered mysterious forces conjured up by scientists to explain their theories.

Many predictions have been made to test the Big Bang without success, yet evolutionists hold out hope that one day they will be confirmed. Good scientific theories are able to make testable predictions that can be falsified, but the Big Bang doesn’t hold up to this definition.

Verlinde’s theories are promising, but not without skepticism. Some call his theory ‘intriguing’ because it’s not based on a mathematically consistent model, but rather based on intuition. His model is considered ‘mathematically and observationally valid’ even though it doesn’t allow for the necessary analysis at this time.

In my opinion, the search for things like dark energy and dark matter is a wild goose chase. Millions of dollars are wasted on it when there are better explanations. Verlinde’s model is just one example. But instead of only accepting naturalistic explanations, why not accept the belief that God created the heavens and the Earth, just as the Bible explains? Why reject the Bible’s claims in favor of naturalistic explanations when that is not warranted or demanded by the evidence? I think it’s far more reasonable to believe that God created the heavens and the Earth than it all came about by pure chance.

I get that many scientists insist upon naturalistic explanations to explain how our universe operates, but I don’t believe that principle applies to origins because God has already revealed our origin. Universes don’t just pop-up out of nowhere for no particular reason; thus, naturalistic explanations are merely an alternative religion- naturalism, another form of faith. But if we already have clues provided by God, then it makes more sense to allow science to proceed from there. I believe if we accept God’s revelation, we’ll have a better, more thorough understanding of where we came from and who we are.