What Can Elpistostege Tell Us About the Origin of the Human Hand?

Here’s an article from Sci Tech Daily claiming that a new fish fossil, not only provides insight into how the human hand evolved from fish fins, but is a missing link in the transition from fish to tetrapod.

Frist, what, exactly, was discovered? Paleontologists from Canada and Australia announced that they found the “complete” fossil of an Elpistostege from the Late Devonian period (about 380 million years ago). Based on this specimen, they believe they can explain how we evolved our hand. Okay, if we accept this information as true, then we should expect to see a clear, gradual transition between our ancestors and us, right? But if this is not what we find, then perhaps their claims are incorrect, and that should lead us to question evolution.

First, it should be noted that the dates involved are dubious. Evolutionists would have us believe their dating methods are reliable, but, as we shall see, that’s not the case. For instance, the dates ascribed to the Devonian and Late Devonian periods vary depending upon the source. As for the Late Devonian, sources (referenced below) range as early as 358 million years ago to as late as 390 million years ago. More specifically, the beginning of the Late Devonian ranges between 382 and 390 MYA and ends between 358 and 364 MYA. The fossil in question is said to be about 380 million years old, but how do they know it’s really that old if the ages for the boundaries are unreliable? Perhaps a different set of researchers would arrive at different date for the specimen. But that’s mere speculation. For now, let’s accept the date they provided.

Another claim they made is that Elpistostege lived “in a shallow marine to estuarine habitat”. But how do they know that? No one was there to observe it in its natural habitat, so they must infer this, presumably based on geological evidence, but none of the articles elaborate, so once again we must blindly accept their conclusion.

Interestingly, the journal Nature actually reveals that the “Hypotheses of tetrapod origins rely heavily on the anatomy of a few tetrapod-like fish fossils from the Middle and Late Devonian period”. How can they base an entire evolutionary paradigm on just a few fossils more than 358 million years old? Modern forensic scientists, for instance, have a tough time accumulating enough evidence to solve a murder that happened ten years ago. But we’re expected to accept, by faith, that fish eventually evolved into humans based on a few fossils, most of which are fragmented? That doesn’t seem like a strong case for evolution to me.

Speaking of fragments, the researchers claim this was a “complete” specimen of Elpistostege, however, if we read carefully, we find that the pectoral fins are only visible ventrally. Further, if we have the audacity to read the actual article published in the journal Nature, we discover that none of the organisms examined includes the complete skeletal anatomy of the pectoral fin. Therefore, we don’t have a complete specimen as claimed.

Now, when I view the photographs, the bones in the fins are difficult to discern. Admittedly, I’m no expert, so I must defer to their expertise. However, not surprisingly, they resorted to using high energy CT-scans to improve their view, and they have concluded that the pectoral fins contain a humerus, radius, ulna, rows of carpal bones, and phalanges organized in digits.

That’s all well and good, but I urge you to take a close look at the color-coded drawings of the pectoral fin anatomy in Elpistostege and its supposed relatives. I don’t see any clear evidence of evolution. For instance, they make the case that fossils in this taxa (called elpistostegelians) such as Panderichthys and Tiktaalik evolved into Elpistostege, and Elpistostege evolved into a tetrapod (a four-limbed vertebrate) called Tulerpeton. But their bones are of various sizes and shapes and aren’t progressing in the evolutionary direction demanded. If we go by the bone structure, it actually looks like these organisms did NOT evolve into a tetrapod. To be precise, the ulnare bones, color coded yellow, at first glance might seem to be “evolving” in size from Panderichthys to Tiktaalik to Elpistostege, but by the time we get to Tulerpeton, the bone has been radically reduced to support true fingers. What happened? Where’s the evolution? The authors want us to focus on the digits, not the whole picture. 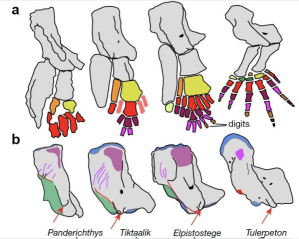 Another article by MSN has some nice anatomy charts showing a radical change in the radius and ulna bones we wouldn’t predict if Elpistostege were evolving into a tetrapod. Then there’s a radical shift in bone structure and the rearrangement of the radiale and additional carpal bones. Obviously, if evolution were true, then we would need many more candidates than the few we have now, and they would have to document these changes. As it is, the discovery of Elpistostege does very little to support the claim that this organism is a missing link.

Now I want to look at these four organisms from a different angle. First up is Panderichthys; this is considered an extinct lobe-finned fish, about 3 to 4.2 feet long (90-130 cm) from the Late Devonian. It lived about 380 million years ago, the same time as Elpistostege. Interestingly, Elpistostege is said to have lived in shallow waters in Canada, while Panderichthys lived in the shallow waters of Latvia. If they both lived at the same time, how did one evolve into the other, and which evolved into which? There’s clearly an evolutionary disconnect.

Going back to Elpistostege, this is an extinct lobe-finned fish that lived about 380 million years ago, was 5.1 feet long (1.57 meters), and lived in Canada. If one believed in evolution, I think one could make the case that any one of these three evolved into the other. But then that could muddy up the waters for the claim that Elpistostege provides insight into how we evolved our hand from fish fins.

Considering all this conflicting information, which organism evolved into which? Evolutionists like to present their audience with a nice evolutionary progression, and that’s what they did in their diagram, but it’s hard to justify it and make the case that Panderichthys evolved into Tiktaalik, which evolved into Elpistostege, which evolved into Tulerpeton. When we put everything together and consider the time they lived, their length, bone structure, and anatomy, we don’t see the clear-cut evolution expected. In order to see evolution, one must ignore all the discrepancies, or explain them away.

Interestingly, the article mentions a startling fact, admitting that Elpistostege “is not necessarily our ancestor, but it is the closest we can get to a true ‘transitional fossil,’ an intermediate between fishes and tetrapods.” Okay, so after all that, we learn that this fish, touted as a “missing evolutionary link”, probably isn’t one of our ancestors, and probably didn’t evolve into a tetrapod!?! But it made for a good story, and probably helped unsuspecting evolutionists reinforce their belief in evolution.

So, how and why did they decide that Elpistostege is not our evolutionary ancestor or transitional to tetrapods? They don’t spell it out in the article, but there were already tetrapod tracks dating back to 397 million years, earlier than any of these lobe-finned fish, and that means none of them could be the missing link they’re looking for. None of them evolved into tetrapods, so there really isn’t much Elpistostege can tell us about how our hands evolved from fish fins, and that’s because our hands didn’t evolve from a fish (or any other animal).

Lastly, the article provides a nice animation of what they think Elpistostege looked like and how it behaved. The lobe-finned fish hops up on a rock and poses, propping itself up on its fins. But the problem is that this scene probably never happened. Living lobe-finned fish don’t push themselves up on their fins, so there’s no reason to think Elpistostege could. The Coelacanth, for example, was thought to have gone extinct over 65 million years ago, and scientists thought it was the ancestor of tetrapods and amphibians, and could push itself up on its fins. But once a living one was caught in 1938, we quickly learned they didn’t use their fins for walking at all. This means Elpistostege may not have been able to prop itself up on its fins either.

The discovery of this Elpistostege fossil serves as a great example of why I reject evolution, and I hope it would cause anyone who does believe in evolution to reconsider. I also think it’s a good reminder that God created a wide variety of organisms, each reproducing according to their kind.

References for the Devonian Time Period: