Earlier this week I wrote an article about Climate Change and the United Nations, and today I read an article in Scientific American about how climate changes have shaped human evolution. Climate change is a pervasive and relentless subject that must be understood in terms of science, politics and ideology, and I think this article touches on all these aspects in one way or another.

The writer, Peter B. deMenocal of Columbia University, spent time in northern Kenya and observed the extreme heat near Lake Turkana. He proceeds to tell us that there’s evidence of a time- 3.6 million years ago- when this lake was much larger and deeper, and he points to fossils of algae and fish that are commonly found within the surrounding sediment as evidence. He concludes that this suggests that a change in climate “may have played a big role in shaping human evolution,” and that a growing number of scientists believe this. 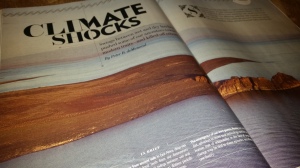 One of the first things I want to know is, what kind of evolution is he referring to? Does he mean that a changing climate played a role in the evolution of an ape-like creature on its way to becoming human, or merely that it affected how human traits changed as we were forced to adapt to climate change? Well, it seems that he means both, and doesn’t distinguish between the two, and I find that problematic.

Another thing that strikes me is how he states that a growing number of scientists share these “beliefs” about climate change and evolution. But what is a belief? Belief is defined as:

a feeling of being sure that someone or something exists or that something is true. It’s: a feeling that something is good, right or valuable, or a feeling of trust in the worth or ability of someone. It’s further defined as: a state or habit of mind in which trust or confidence is placed in some person or thing. It’s something believed; especially a tenet or body of tenets held by a group. Belief is a conviction of the truth of some statement based on examination of evidence.

I think it’s important to keep the definition in mind when trying to understand what scientists believe. All too often, when we hear that scientists believe something, we conclude that it must be true. But that’s not how it works. Here, scientists aren’t able to observe the past, so they examine evidence left behind, and they feel that that’s enough to believe that we evolved from an ape-like ancestor, and they explain how the climate had a role in that. It doesn’t mean they’re right; it just means that they’ve identified a plausible explanation that is consistent with their worldview at the present time. Future evidence often alters those beliefs they once thought were true.

With all this in mind, the writer makes a statement of faith. He claims that this region in Africa “possesses most of the fossil record of early human origins and our evolutionary journey since our lineage split from African apes more than seven million years ago.” He assumes that these fossils are capable of revealing the origins of early humans from apes, and that such a split existed. I’d argue that neither of these assumptions are warranted, and that examining fossil evidence cannot provide a record of early human origins. In fact, the writer contradicts himself when he tells us that between 2.9 million and 2.4 million years ago Australopithecus afarensis- a hominid supposedly closely related to humans- went extinct, and two distinctive groups of humans appeared. I find it fascinating that he uses the term “appeared” rather than evolved. These two groups- Homo and Paranthropus– appear, but there’s no evidence that they evolved from any particular branch, and his choice of terms highlights this. Therefore, since these two groups appear out of nowhere, what does that tell us about the early origin of humans and our evolutionary journey? Nothing, except that it’s still a mystery to secular scientists, and it compliments the origin of man found in the Bible. Humans were created by God, which means we have no evolutionary journey.

It’s also interesting to note that when Homo first appeared, there also appeared stone tools, which is what we’d expect to find with humans.

Nonetheless, the writer goes on to speak of two major climate shifts in Africa that would have caused significant changes in human evolution. Supposedly, there was one evolutionary “shake-up” between 2.9 million and 2.4 million years ago, and then another between 1.9 million and 1.6 million years ago, and these shifts are believed by some scientists to have caused the extinction and rise of several hominids, including humans. We’re told that there were long periods of extremely gradual change where humanity moved towards dry and open grasslands. But then there were rapid climate changes that went back-and-forth between wet and dry periods, which meant that our non-human ancestors had to learn how to adapt to rapidly changing landscapes in order to thrive. Evolutionary traits would have been acquired in a series of concentrated bursts when the environment was changing.

The point about our ancestors having to learn how to adapt to a rapidly changing environment brings to mind something I blogged about in Climate Change and the United Nations. Certain politicians are trying to convince us that we must resort to legislation in order to combat climate change, however, if one even believes in evolution, it seems it’s necessary to acknowledge that early humans were able to adapt just fine to extreme weather conditions without legislation. I find it amazing that our ancestors, who are often thought of as uneducated brutes, were able to withstand climate change and thrive, while our government thinks so little of modern humans that we must be forced to reduce our carbon footprint in order to prevent climate change from occurring. Where have we come from, and where are we going that we’re no longer able to adapt to a changing climate without government intervention? Have we digressed so far from the abilities of our ancestors? Are we less evolved? It seems that’s what our government thinks.

Back to the article on Climate Shocks, deMenocal makes another strange comment. He says that the evidence he’s referring to comes from “data” that “tells” us how and why the climate and vegetation changed during the two evolutionary shake-ups. The problem I have with this is that “data” doesn’t “tell” us anything. Humans must interpret the data and form conclusions (based on one’s ideology and worldview), but the data doesn’t speak for itself. That’s important to understand because, so often, people act as if it’s the data or evidence that formulates the conclusion with no human input.

deMenocal supports Charles Darwin’s theories linking climate change and evolution, but I think he makes some mistakes. He explains that large-scale shifts in climate can affect food choices, shelter and resources, and I agree with that. He goes on to explain that this, in turn, will create pressures that lead to adaptation, extinction, or evolution into different species. I also agree that these pressures will lead to adaptation and extinction, however, the emergence of a new species doesn’t require evolution. Speciation can occur without evoking evolution. Evolution is a process that happens when one organism turns into a different kind of organism with novel features and traits (such as a dinosaur into a bird). But when one species gives rise to another species, this is called speciation, not evolution.

deMenocal brings up some other points that I think favor creationists. He points to five mass extinctions over the past 540 million years accompanied by an environmental disruption, where between 50 and 90 percent of all species perished, followed by bursts of new, very different species. This is close to what creationists have proposed with a global flood that would have wiped out a large number of species, replacing them with very new and different species not all that long ago.

As for what caused the climate and vegetation to change, deMenocal suggests it was a result of a rapid succession of wet-dry cycles that moved toward drier conditions, and were the result of monsoons and the earth’s orbital wobble. These conclusions are based on molecular remnants of vegetation, chemical analyses of our ancestor’s teeth (assuming that that creature is our ancestor), and core samples.

I don’t think he meant to do this, but I think deMenocal succeeded in demonstrating how existing human traits would have been affected by climate change, and he made a good argument as to how successful early man was at adapting to a changing climate, but his evolutionary claims are merely assumptions based on his worldview. He paints an evolutionary just-so story and runs with it. He’s basically saying, if an ape-like creature evolved into a modern human, then changes in the climate would have affected how we evolved.

Overall, I don’t think this article makes a compelling case in favor of evolution. Instead, it reinforces the Bible’s claims about the origin of man.