When it comes to maintaining any particular belief system, it’s possible for either side to develop a wealth of arguments in favor of that belief, or against opposing beliefs. In this article I wish to address one particular argument used against creation science, an argument made by a fellow blogger.

The argument is that (supposedly), only evolution can explain the distribution of animals we see today around the world, and that creation science cannot.

But the argument primarily relies on an incorrect understanding of creation science; by building a straw man argument, one can easily knock it over. Evolutionists scoff at a historical, worldwide flood (on a side note, many evolutionists believe in a global flood on Mars, which has no liquid water). Therefore, the idea that animals could have migrated from the Middle East (where they exited the ark) to where they live now seems to be a monumental hurdle that evolutionists pose to creationists.

One particular model creationists use to explain animal distribution is log mats: creationists believe that Noah’s Flood would have destroyed all the forests around the world. This, in turn, would have left billions of trees floating as log mats in the oceans for centuries. Animals, then, may have become trapped on them, and some would have survived perilous journeys to be transported across the oceans to various parts of the world.

Some evolutionists are quick to express their credulity, mocking the notion that animals could use rafts during the great flood, wondering what they would have eaten for the 150 days that everything was flooded, and they suggest that this contradicts the Bible’s claim that everything on the planet that wasn’t in the ark, died.

But this interpretation of the creationist model is a false caricature; creationists don’t believe this representation. Animals wouldn’t have been bobbing around in the ocean for 150 days during the flood, and creationists don’t teach this. We maintain that all the animals not on the ark would have died, just as the Bible says in Genesis 6:

7 So the Lord said, “I will wipe from the face of the earth the human race I have created—and with them the animals, the birds and the creatures that move along the ground—for I regret that I have made them.”

17 I am going to bring floodwaters on the earth to destroy all life under the heavens, every creature that has the breath of life in it. Everything on earth will perish.

Therefore, if we understand what the Bible says and compare it to the creationist model, what we have is consistent with what we find in reality. All creatures with the breath of life in them would have perished; none of the animals outside the ark would have survived, except for those who met the criteria listed in Genesis. Creationists have long understood that some organisms would have survived the flood, and others would not. According to the Bible, one of the conditions for organisms perishing would be determined by whether or not the animals (birds and creatures that move along the ground) had the breath of life in them. Some organisms, such as insects, bacteria, fungi, and plants, do not have the breath of life in them the same way you and I do. In the Bible, God describes animals with the breath of life with the Hebrew phrase “nephesh chayyah,” which refers to the spirit that man and animals have. Plants, for example, are never referred to in the Bible as nephesh.

Further, fish would not to be included with the creatures on board the ark. And neither would every single species of land animal or bird; only representatives of each kind of animal would have been saved (one elephant kind representing all elephants, mastodons, mammoths, etc.).

According to the creationist model, once the flood had ended, and after all the animals left the ark, then, in the following years, some of the surviving animals would have been trapped on debris and log mats, and those that were fortunate to survive long journeys would have made it to various islands and other parts of the world. In this way, through a series of unlikely events, some animals (but not all) would be distributed to wherever they are today.

But a critic may ask, what did these animals eat and drink while at sea? This is a perfectly legitimate question. And I would suggest that, while we may not know the exact diet, it’s likely that those that survived the journey would have had something to eat or drink while at sea. The iguanas on the Galapagos Islands, for example, probably had something to eat or drink on their way to the islands. 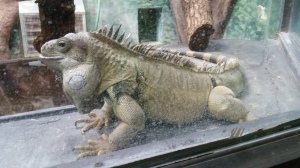 We know that the iguanas and tortoises on the Galapagos Islands didn’t evolve there; at some point they made the dangerous journey from the nearest land, some 575 miles west of Ecuador. Since they obviously survived the journey, they must have had some sort of nourishment; but even if they didn’t have access to their normal diet, perhaps they improvised, or were near starvation, barely clinging to life by the time they reached the new land. No one was there to observe their migration, but we know they’re there, so we can only speculate how it happened. We don’t have to assume they evolved there.

But another very interesting point to make is that, if we examine evolutionist literature, we find that they also accept the theory that animals must have somehow floated across the ocean to colonize the islands. They recognize that animals, including mammals, couldn’t have simply evolved on the islands. They theorize that these land-bound animals were swept out to sea on masses of floating vegetation from flooding rivers, and those that didn’t die along the way would have colonized different islands.

In fact, according to an article published in Phys Org, Darwin himself hypothesized that various animals could have crossed the oceans on vegetation rafts, icebergs, or by hitching rides on birds. This idea was called “jump dispersal,” and there are studies suggesting that he was right. In the end, we just need to use the power of deduction to determine how animals were distributed across the globe. No belief in evolution is necessary.

Consider this scenario: what if two different species of animals were washed out to sea on the same floating mass of vegetation (say a young wildcat and a handful of rats)? The cat could eat the rats, and then resort to eating the vegetation to avoid starvation. If it rained, the cat could drink rainwater, and by the time it reached land it would probably be severely malnourished, but alive. This might be a rare occurrence, but studies allow for the possibility.

As mentioned, log mats aren’t the only way for animals to be distributed all over the world. Creationists also believe natural land bridges would have allowed animals to cross oceans and settle in other regions of the world. Perhaps some of those land bridges would have survived a few decades- long enough for some animals to cross. Both creationists and evolutionists recognize this; after all, we know that the water level on this planet has never been consistent throughout history.

Other animals may have crossed ice bridges during the ice age. And right after the flood, when the continents were at an early stage of separation, it’s possible that they were close enough for the migration of some young, strong predators, such as jaguars. They may have only needed to survive a week or so at sea- not months. Another possibility is that humans may have taken some wild animals with them on their voyages as they sailed to North and South America, or to other locations. Perhaps there are other possibilities we haven’t even considered yet.

There are plenty of unlikely events that would allow for the distribution of animals to where they are now, and evolutionists recognize this truth; they just don’t like to admit that it could happen as quickly as creationists propose. But all we really need to do is understand how animals get from place-to-place today to understand how it could have happened in the past. The important point to note is that we don’t need to resort to evolution. The creationist model best explains the data while maintaining Biblical consistency.

While evolutionists attempt to poke holes in creation science, the evidence only strengthens its credibility.