Pope Francis on the Big Bang and Evolution

I’m disappointed with Pope Francis’ recent remarks on evolution and the Big Bang. I’m not surprised, but very disappointed.

Shortly after the Pope was elected on March 13, 2013, I wanted to know where he stood on these issues, but there wasn’t much to go on. I wrote an article suggesting that he’ll probably come out in favor of evolution, but I was hoping that wouldn’t be the case. Well, the wait is over, and he’s made it clear that he’ll side with secularism over the creation account recorded in the Bible (Genesis 1-2).

Pope Francis said, “When we read about Creation in Genesis, we run the risk of imagining God was a magician, with a magic wand able to do everything. But that is not so.” He went on to say that God “created human beings and let them develop according to the internal laws that he gave to each one so they would reach their fulfillment.” He also declared that “The Big Bang, which today we hold to be the origin of the world, does not contradict the intervention of the divine creator but, rather, requires it.” And then he assures us that “Evolution in nature is not inconsistent with the notion of creation, because evolution requires the creation of beings that evolve.” 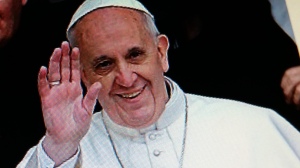 Some of these statements I find unbelievable. How could the leader of the worldwide Catholic Church make such absurd comments? Does he really believe that God performing miracles is akin to a magician waiving a magic wand and doing magic? Doesn’t he believe in an all-powerful God who can work miracles? What does he mean that we run the risk of imagining God is a magician if we don’t believe in the Big Bang? Do we run the same risk if we believe that God parted the Red Sea, that Jesus walked on water, gave sight to the blind, or rose from the dead?

Unless he was misquoted, the Pope is clearly wrong. Believing that God created the universe in six days doesn’t imply that God is some sort of magician. It means that we believe God is all-powerful, almighty, and the maker of the heavens and earth. This is the faith the Biblical writers called for. The universe was formed at God’s command (Hebrews 11:3), and he created it over a six day period (Exodus 20:11); that’s not magic. Only God could do that.

Some of the Pope’s other quotes may leave room for interpretation, but it sounds to me like he’s siding with secularism over the Bible, and that should be disturbing to anyone who respects the Church and believes in God. It comes across as if he’s rejecting God’s revelation to us.

Pope Francis does affirm that God “created human beings,” which is great, but I’m not sure how he defines the word “create”. Does he mean that God formed man from the dust of the ground and breathed into his nostrils the breath of life (Genesis 2:7)? Or does he reject the Biblical account in favor of the Big Bang model, in which man eventually evolves from a common ancestor billions of years later? And if he believes the latter, then could it be said that such a belief also runs the risk of imagining that God was a magician, waiving a magic wand to guide our evolution? Or, in order to avoid imagining this, must we conclude that man evolved by naturalistic processes without God’s intervention at all? I’d suggest that if God wasn’t involved in our creation, then, not only is he not a magician, he’s not God… at least not the same god described in the Bible. So that leaves me wondering what kind of god the Pope believes in. Does he believe in a deistic god who wound up the universe and let it go, not knowing what would happen? Or some god who simply observes the universe as it unfolds? What kind of God does he think is acceptable to believe in? That’s important to know so that we don’t run the risk of imagining that God is a magician. The Pope needs to tell us.

He insists that the Big Bang doesn’t contradict the intervention of the divine creator, but, rather, “requires it”, and that this is the origin of the world which we hold today. Well, it’s the origin of the world that he may believe in at the moment, but what if the secular world abandons the Big Bang for a different theory one year from now? Does he grab onto the next, latest and greatest idea and try to conform God into that one too?

Sure, the Pope may believe the Big Bang doesn’t contradict the intervention of a divine creator, but that’s completely irrelevant. Believing that God could have created the universe through the Big Bang sounds wonderful, but the important thing to keep in mind is that he told us that he created the universe supernaturally, by his command, over the course of six days. We need to listen to what God says he did, not what the Pope believes God is capable of doing. We don’t need to get caught up in hypothetical scenarios that lead us in the wrong direction.

Further, anyone who examines the Big Bang cosmology and compares it to the creation model can’t help but notice major differences. It’s not just six days vs. billions of years, but it includes the order of events. The Bible tells us that fruit bearing plants appeared on day three; the sun, moon and stars weren’t created until the fourth day; birds and fish didn’t appear until day five, and land animals didn’t appear until day six. The Big Bang model says that the sun appeared long before the earth was formed; fruit bearing plants didn’t appear until after the dinosaurs went extinct, and dinosaurs evolved into birds. So, while the Big Bang doesn’t contradict the intervention of a divine creator, it does contradict the Bible.

And if the Bible is the infallible Word of God, then wouldn’t it be in the best interest of the Pope to side with the Biblical origin of the universe? Unfortunately, the Pope sides with the secular model, which rejects any intervention by a god, and only accepts naturalistic processes. Atheists don’t believe that the Big Bang requires a divine creator, so why is he grasping onto it? Does he hope to win their approval? He may be appeasing them by accepting their theories, and he may be appeasing religious people who also reject the Genesis account, but he’s not doing anything to affirm the Bible as the infallible Word of God, and he’s not reassuring Christians that we can trust the Bible as truth. If the Biblical account of creation is not accurate, then why should we believe anything it tells us? The Bible says that sin and death were the result of Adam’s disobedience, but the Big Bang tells us that there has always been death. How, then, do we reconcile this apparent contradiction? I don’t think there’s a satisfactory answer.

Nonetheless, in order to avoid admitting that there are any contradictions, many have resorted to reinterpreting the word “day” in Genesis to mean an indefinite period of time, or they have reinterpreted the entire Genesis account as an allegory that has nothing to do with the “real” creation of the universe. I’m not sure what the Pope’s interpretation is.

I’m also not sure how he can say that evolution is not inconsistent with the notion of creation when I can provide examples of such inconsistencies; the creation account tells us that God commanded the animals to reproduce after their kind (Genesis 1:20-25). But evolution says that animals will reproduce different kinds of organisms. Only one can be true, not both. If God was correct, then animals can’t and don’t evolve into something else.

There’s no escaping the contradictions and inconsistencies. I think the Pope desperately wants to avoid them, but fails miserably. I’d much rather see the Pope boldly stand by the Word of God, even if it means being ridiculed by the secular world. In contrast, I think it would be a tremendous witness if we had Christian leaders who aren’t ashamed of the Bible’s claims. But the Pope doesn’t appear to be such a person. He seems more concerned about being accepted by the secular community than about upholding God’s Word.

The real risk the Pope runs is presenting a god that nobody needs; a god who can’t do anything, but must rely on naturalistic processes devoid of any hint of the supernatural. Who needs a god like that? An atheist would have no reason to believe there was any intervention by a creator. The Bible, on the other hand, offers a distinct contrast; it offers a reason and hope for salvation. Jesus Christ solves the problem of sin and death.

4 thoughts on “Pope Francis on the Big Bang and Evolution”