Rise of the Tyrannosaurs

I eagerly read an article in the May issue of Scientific American called “Rise of the Tyrannosaurs” and was fascinated with the latest discoveries. As an avid dinosaur junkie, I was thrilled with the latest Jurassic Park movie, Jurassic World, and loved the prominent role the Tyrant King played in the movies, so this article was well-timed.

The author of the article, paleontologist Stephen Brusatte, attempts to establish the elusive evolutionary history and family tree of tyrannosaurs- one that had been lacking since Tyrannosaurus rex was first discovered in 1900. But over the last 15 years, he argues, there have been about 20 new species of tyrannosaurs discovered around the world that shed light on where T. rex came from, how the species originated, what they evolved from, and how they grew so big. 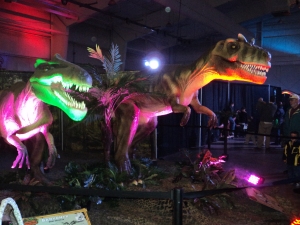 Brusatte pieces together a number of clues, and here’s a rundown of several important discoveries:

In 2010, in the bitter cold of Siberia, paleontologists unearthed a dinosaur that was later named Kileskus (meaning “lizard”), but it didn’t look similar to T. rex at all. Instead, Kileskus was a small, human-sized meat-eater that supposedly lived about 170 million years ago. But in 2006 another small, meat-eating dinosaur was discovered in China called Guanlong, and it’s claimed that he lived about 160 million years ago.

It turns out that Kileskus looks very similar to Guanlong; both are described as having “a gaudy mohawklike crest of bone running along the top of the skull.” But even though Kileskus doesn’t look anything like T. rex, Guanlong does have features only seen in tyrannosaurs, such as a fused nasal bone. Evolutionists like Brusatte believe such similarities are signs of common ancestry, therefore he concludes that they’re related.

Brusatte looks at two other dinosaurs from China: Dilong- a small, speedy, dog-sized carnivore with long arms, and Yutyrannus- a much larger predator. They both supposedly lived around 125 million years ago and possess the fused nasal bones like tyrannosaurs. He also claims that they both have evidence of “downy coats”, connecting them to feathered birds.

This is one of the many conclusions I take issue with. Brusatte says the dinosaur bones were covered with thick, feathery fluff, but admits they’re not like the quill-pen feathers of birds. But just because he describes them as “feathery” doesn’t mean that they are feathers or are even related to feathers. The fact that they’re unlike feathers is rather telling. If they don’t have the quill-pen feathers, then perhaps they shouldn’t be called feathers at all. Evolutionists love to site similarities as a sign of common ancestry- except when they don’t. Notice that earlier he acknowledged that Kileskus doesn’t look similar to T. rex, but because it does look similar to Guanlong, and because Guanlong does have similarities to T. rex, they’re all considered related. And because Dilong and Yutyrannus have fluff, they assume that all tyrannosaurs had feathers. See how this works?

Even though none of these dinosaurs have feathers, evolutionists interpret them as feathers because they need to demonstrate evolution via a dinosaur-to-bird connection, and this is how they do that. And in this article they also wish to convince us that tyrannosaurs evolved from smaller dinosaurs.

Brusatte also admits that there’s still some uncertainty as to how and why these smaller dinosaurs ushered in the large tyrannosaurs that became the apex predators, but he does argue that a change in climate, fluctuating sea levels and a radical change in ecosystems contributed to a mass extinction 94 million years ago.

From a creationist perspective, this has all the makings of a great flood that would have resulted in such radical change and mass extinction. But most paleontologists won’t go there, even though the evidence supports that.

Brusatte goes on to describe two other Tyrannosaurs: In 2010 a construction crew in China unearthed the bones of a new species named Qianzhousaurus, a name derived from the city of Ganzhou, in which it was found. This dinosaur, noted for having a long snout, was appropriately given the nickname Pinocchio rex. It’s described as “strikingly different” from T. rex due to its smaller size and a long, narrow, delicate skull. Then there’s another long-snouted dinosaur from Mongolia, called Alioramus.

The discovery of these long-snouted tyrannosaurs encouraged Brusatte to conclude that they were a distinct species living across Asia at the same time as T. rex.

The last tyrannosaurid he describes is Nanuqsaurus, found in the Arctic Circle of Alaska. This dinosaur is about half the size of T. rex, and Brusatte assumes the smaller size is due to an environment that didn’t have the resources to support such a large body.

But even with all these amazing discoveries, many questions remain. Paleontologists still don’t know where or when these creatures originated, or the extent of where they lived. Even questions about their biology remain.

One last interesting quote is that Brusatte admits that evolution is “not predictable”. I find this to be an accurate statement of faith, but it also highlights the fact that evolution isn’t real science because real science has to do with predictability. The ability to predict is one of the important staples of science, and evolution cannot do that.

All the important discoveries outlined in this article can be explained without referring to evolution and millions of years; all the evidence fits very well within the Biblical framework.