True archaeological discoveries provide invaluable connections to our past, but the attached article from Phys.Org blurs the line between archaeology and fiction. It champions evolution based on a modern, secular mythology.

For example, the authors make multiple unsubstantiated claims. First, they claim that the skull of a three-year-old child (Taung Child) was discovered in southern Africa, but that’s not true. A child is a young human, but what they discovered wasn’t human. The use of such terminology is meant to intentionally blur the line between human and animal so that an evolutionary link is established. The choice of words is vital to the evolutionist’s cause, but it has little to do with reality.

The article attempts to demonstrate how archaeological finds are happening so rapidly, they help us better understand our human origins. But what is archaeology? It’s “the scientific study of material remains (as fossil relics, and monuments) of past human life and activities”, or “the remains of the culture of a people”. This is what archaeology used to mean, but today it also includes “prehistory” so that an evolutionary connection is accepted without question. The ape, in essence, has been successfully humanized, and the reader is expected to blindly accept that a human ancestor was found. But if we analyze their claims, we find this to be deceptive.

They tell us that the Taung child is “our first encounter with an ancient group of proto-humans”. But is it really? Consider an important admission they make: “Even since the turn of the 21st century, human origins textbooks have been rewritten over and over again”. Did you catch that? If human evolution is so certain, why would textbooks on human origins have to be rewritten over and over again? If what you learned about human evolution in school were true, then shouldn’t new discoveries simply add to our knowledge, rather than rewrite it? I’d suggest this admission is evidence that what we’ve been taught was never a factual explanation of the scientific evidence in the first place, and we have no reason to believe modern textbooks are any more factual; it’s only a matter of time before today’s version of human origins is rewritten for the umpteenth time.

The mistakes continue as they claim, “Human fossils are outgrowing the family tree”. That should lead us to ask, how are they defining ‘human’? Aren’t they really just assuming these fossil discoveries belong to our human ancestors, and thus an ape fossil becomes interchangeable with a human fossil based on evolutionary convenience? Yes, that’s the name of the game.

The next claim is self-contradictory. The authors say, “In Africa, there are now several fossil candidates for the earliest hominin dated to between 5 and 7 million years ago, when we know humans likely split off from other Great Apes based on differences in our DNA.” First, they tell us “we know” something about the past, but then admit it’s only “likely”, which implies it’s possible they could be wrong. So which is it? It’s really an admission that what they believe is based on faith, not facts. Further, if they really ‘know’ what happened in the past, then why are there so may candidates? And if they select one, can they promise their story won’t change?

Interestingly, when I study their references, we find that “The first members of the human lineage lack many features that distinguish us from other primates”. Consider, if the features of these candidates can’t be distinguished, then how do they really know we evolved from them? What we really find out is that our human origin is entirely assumed. These assumptions rely on the morphology of a crushed skull, and are questionable, at best, and other researchers have argued against their human origin. The article from Nature tells us plainly that “There is, however, much contention that Sahelanthropus is a hominin based on these traits”. This firmly contradicts the claims of the authors in Phys.Org. In other words, scientists DO NOT know as much about human history and evolution as they claim.

Other candidates include Orrorin tugenesis and Ardipithecus kaddaba, both of which consist of a few fragments “interpreted” as having bipedality. But, once again, other researchers have called those interpretations into question, as well as the methodology and tools used. This further calls into question their claims of human evolution.

Another admission from the article says, “Today, human evolution looks less like Darwin’s tree and more like a muddy, braided stream.” If that’s true, then human evolution isn’t nearly as certain as evolutionists would have us believe.

The article eventually references traditional archaeology, but it can’t help but merge it into something that has nothing to do with our human past.

As a Biblical creationist, I believe humans were created fully human by God, and I think the fossil evidence supports this claim. There are no fossils that conclusively prove we’re related to apes, or that we evolved from an ape-like ancestor. Everything must be interpreted in light of one’s worldview, and if one rejects our Biblical origin, then they have no choice but to find (or manufacture) an evolutionary connection, even when one doesn’t exist. 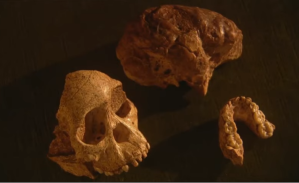