Breakthrough for the Origin of Life?

One of the best arguments against evolution is the origin of life dilemma. Obviously, if there’s no life, then there’s no evolution. If only living organisms can evolve, but there are no living organisms, then evolution cannot happen (assuming it’s even possible). And that’s a big problem because there’s absolutely no scientific evidence whatsoever that life can spontaneously arise from non-living material. The only other option, then, is that life was created, and that’s just not acceptable to evolutionists.

Therefore, evolutionists must manufacture a way for non-life to give birth to life. It doesn’t matter whether or not their solution is unprovable or impossible, but only that it provides an appearance of plausibility, and that’s what this article from Live Science attempts to do.

The headline states, “Early ‘Soda Lakes’ May Have Provided Missing Ingredient Key to the Origin of Life”. In short, their solution is no more than a hopeful guess. In their view, they “may” be correct, but, then again, it is more likely they’re wrong.

Life itself is remarkably complex, yet there are many who either don’t appreciate the complexity, or simply dismiss it, instead relying on a secular faith, philosophy or ideology that tells them that since life does exist, it must have arisen from non-life at some time in some way.

However, certain ingredients are necessary for origin of life theories to work, and that includes carbon, hydrogen, nitrogen, oxygen, phosphorus and sulfur. But no one really knows what the early Earth atmosphere supposedly consisted of. Some scientists believe the early Earth atmosphere contained water vapor, hydrogen sulfide, carbon dioxide, carbon monoxide, methane, ammonia and nitrogen, while others believe it was similar to today’s atmosphere and includes water, carbon dioxide, sulfur dioxide and oxygen. But oxygen and water bring other problems; despite their necessity for life today, oxygen and water are not good for the origin of life. Oxygen is corrosive, and proteins without a protective cell membrane would disintegrate in water. That’s why we don’t observe life forming spontaneously today.

Putting all this aside, the article seeks to explain how phosphorus appeared on earth, and that’s important because it has been a mystery described as ‘the phosphate problem’ and has been a thorn for the origin of life. Researchers now think that lakes in dry environments- known as ‘soda lakes’- were helpful because they provided the necessary phosphate needed for life to arise from non-life.

According to one of the researchers, David Catling, “The early Earth could have hosted many carbonate-rich lakes, which would have had high enough phosphorus concentrations to get life started”. He went on to explain, “The extremely high phosphate levels in these lakes and ponds would have driven reactions that put phosphorus into the molecular building blocks of RNA, proteins and fats, all of which were needed to get life going”.

But even if there were enough carbonate-rich lakes in this hypothetical scenario, that doesn’t make the origin of life any more plausible. Evolutionists believe that, as long as we have all the key ingredients for life, then life becomes inevitable… it’s just a matter of time. However, without intelligence, there’s no mechanism that could create and arrange all the necessary proteins, amino acids, fats, lipids and nucleotides into any kind of meaningful arrangement in the right order that could be considered life.

Thus, creation and intelligent design best explains how and why complex life appeared, and why humans and other organisms exist. Life consists of information within DNA, and information only comes from intelligent sources, never from spontaneous, natural sources. An abundance of phosphate does nothing to contradict such truths. 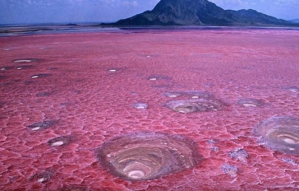