How can 100 stars simply disappear?

According to an international research group, 100 stars that appeared on star maps from the 1950’s are missing from current maps. The old catalog contained about 600 million stars, and the authors discovered about 150,000 anomalies, of which they inspected 24,000 and found 100 points of light that have no corresponding point on the new charts. If these conclusions are correct, then we have a baffling mystery.

This reminds me of the scene in Star Wars where Obi-Wan Kenobi consults Yoda over a missing planet, and Yoda says to his students, “Lost a planet Master Obi-Wan has. How embarrassing… how embarrassing.”

So, scientists have lost about 100 stars… how embarrassing…

Seriously, what happened to them and where did they go? That’s what everyone is asking. And so far, the answers range from natural phenomena to massive alien objects. Believe it or not, there are many who are excited precisely because they think this could be evidence of an advanced alien civilization. But even if aliens do exist, this theory seems completely implausible; the amount of natural resources necessary to build such an object would be staggering… more than all the planets in a solar system could contain, and the lights would have to be as bright as stars. It’s like the aliens would have to travel from planet to planet, robbing them of all their resources as they build bigger and bigger objects and gallivant around the galaxy.

Well, since I don’t believe in aliens, I’ll stick with natural phenomena. Those possibilities include flaring stars or planets, supernovas, collapsing black holes, or just another life-stage of a particular kind of star.

It’s possible the missing stars are still there, but just not as bright as they once were. There’s still so much we don’t know about the lifespan of a star; our ability to observe them is quite limited. For example, obviously, no human has ever lived long enough to see the birth, life and death of any star. And since their lifespans are supposed to be billions of years, and most are so far away, we’ simply don’t have a complete picture. Our cosmological theories are conjecture and purely theoretical. Many scientists believe our sun is about 4.5 billion years old and will last another 5 billion years or more. They think it formed from a cloud of gas that collapsed under its own gravity, and at the end of its life it will grow to the size of a red giant, then collapse to become a white dwarf, and finally, will fade and become a black dwarf. But all this is just guess-work. There are no experiments to substantiate these theories.

Therefore, it’s quite possible these missing stars are still there but have lost their brightness and are fading out of existence faster than anyone expected. Maybe stars don’t last billions of years after all, and maybe the universe isn’t so old either.

Consider this: if about 100 stars have faded from existence over the last 70 years, then how many more will fade away in the next 70? Will the number of missing stars increase in frequency, or is this just an anomaly? Will we ever find the missing stars, or are they gone forever? I suppose this could be some kind of glitch or human error, but time will tell, and I’m looking forward to future research. 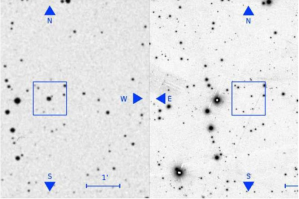 Where’d it go? An image taken in the 1950s (left) shows a large object at center that doesn’t appear in an image of the same field taken more recently. (Villarroel et al.)