Wednesday, January 22 marked the 47th anniversary of Roe vs. Wade, and today was the annual March for Life in Washington, D.C. This annual event is the world’s largest human rights demonstration, and it brings attention to the 1973 Supreme Court ruling which declared state laws prohibiting abortions to be unconstitutional.

The theme for this year’s march is “Life Empowers: Pro-Life is Pro-Woman.” I think this is a great choice because it cuts through the culture of politics seeking to end life. Feminists have sought to capitalize on the pro-woman theme, convincing many that a fetus is not a human, but is part of a woman’s body that may be freely discarded. But now it’s time to show that being pro-woman means being pro-life.

Sadly, the right to life has long been a political wedge, dividing human beings. There was a time in America when human beings were owned as slaves and considered property. When Darwin published his books, The Origin of Species and The Descent of Man, evolutionists considered people of color to be less evolved. During the Holocaust, Jews were experimented on and exterminated because of their race; and many people with disabilities were put to death or sterilized because they were thought to be ‘unfit’. And today the trend to dehumanize humans continues in the form of abortion on demand.

This is one of the many reasons why I’m happy to be part of the pro-life cause. I think it’s important to make the case that all human beings are, from the point of conception, created in the image of God and have intrinsic value. And I believe it’s important to be a voice for the voiceless. 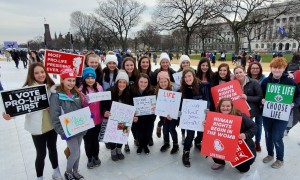 I also found it exciting that President Donald Trump stood with the crowd of supporters and spoke on behalf of the unborn. President Trump has been this nations most pro-life President and has done more to advance this great cause than any other. So it’s fitting that he’s now the first President to attend the March for Life in person.

It is my hope and prayer that Roe vs. Wade is overturned very soon, and that women who are truly struggling with an unwanted or difficult pregnancy will receive the compassionate help they need and want.